Here can be seen the wrong in-line breeding and their damaging results as: the missing hair and or sub hair, small height, hip- displasya, wrong colour, etc
2 comentarii... 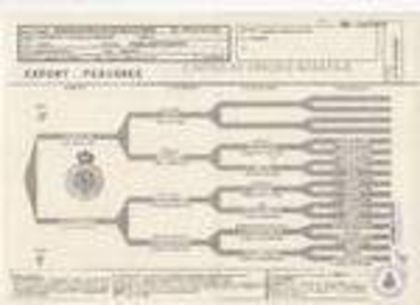 pedigree Number one for sunpoint from apuseni 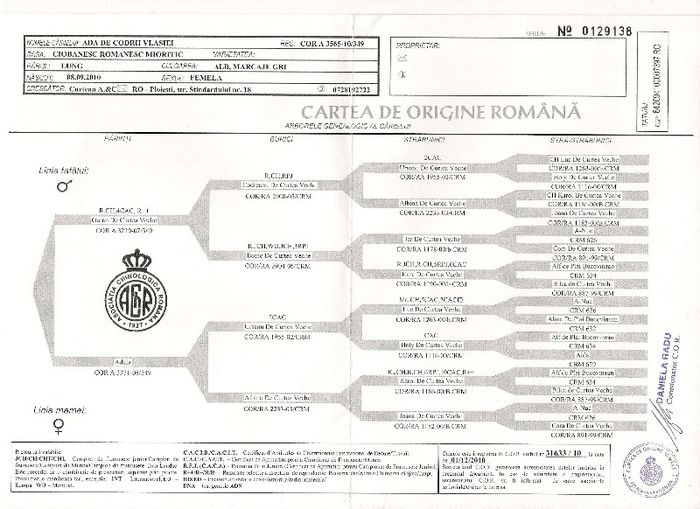 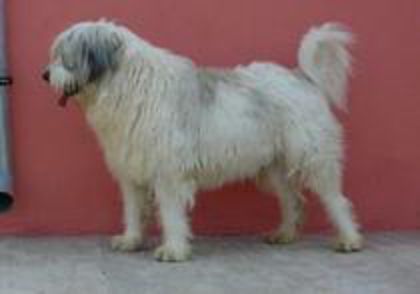 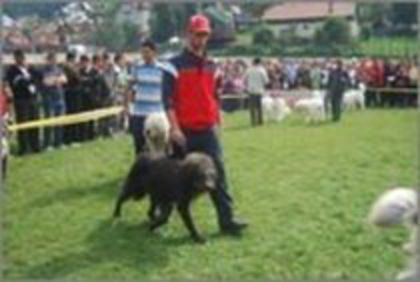 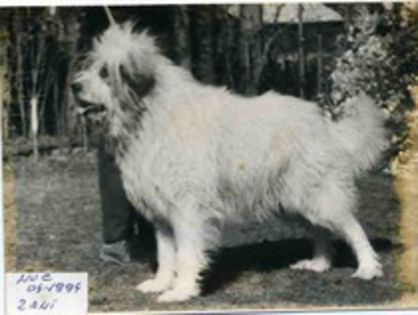 ClubulNationalDeCainiCiobanestiRomanesti 12 februarie 2013
Good day
Analyzing your dog pedigree I have to tell you the next comments:
1. You have the dog named A-Nuc inside of them and that dog was a metis between mioritic and carpatin as you easily can see here:
clubulnationaldecainiciobanestir ... la_miortic
You have to know and that dog it is again the father of Bilca de Curtea Veche and the father of Jana de Curtea Veche. IT IS FORBIDDEN TO MATTING DOGS LIKE A-NUC MOREOVER TO MAKE CONSANGVINZATION AFTER HIM
2. Also Alf de Plai Bucovinean was the litter brother of Aluna de Plai Bucovinean.So you have another consangvinization in this pedigree.
3. Bradut was a mioritic with a huge prognatism and her "very good" = F Bine (that is below Excellent are real).What is very very interesting is that her mother Frunza matted and born him at six years after she died!!! Normal it is a false declaration of the owner mr Bere!
4. Sarona was a small female and her title of CMBR= that means Best of Breed BOB is false!
5.Tissa was never judged as junior but she has an Romanian Prim Junior RPJ title inscribed by fraud in her palmares. Also she was matted 4 rounds one by another despite of all FCI and normal roules and respect for dogs.
More than this her genealogy was never declared and really as you may easily see on:
Ursula de Brillantim _ Fals
clubulnationaldecainiciobanestir ... e/38437264
where the words "Monta nedeclarata" means "matting never registered and declared", and "Caini care nu au fost montati niciodata" means that "dogs never matted"
6.The correct name of Bucksi was Bucksi de Romania.The probe are here
clubulnationaldecainiciobanestir ... te/pagina3
clubulnationaldecainiciobanestir ... te/pagina5
where at "mara mama lui bucksi" you have de original pedigree of the mother of Bucksi whose belongs to me in de Romania Kennel.
The owner,mr Bere Adrian was changed the name of the dogs by using a personal relation at Romanian Book of Origin COR
7.Martin de Runc was registered by false under this name because he was born into "de Suceava"Kennel owned by mr Ovadiuc from Suceava city and bought by the owner of "de Runc" kennel at the age of several months. As you well know the owner of the kennel where the dog was born can registered under his mark no other owners of that dog during his life.Normal the dog name it is Martin de Suceava!
Also you have another consangvinization here because he is the father of Iaro D-Pirat
8. Mother of Iaro D-Pirat was Fraga. But the name of Fraga due to a false registration request from the onwer of her, mr. Pal Puiu (Iaro kennel), was changed into Iaro Fraga. Mr. Pal Puiu recognaized on his personal site, that this dog Fraga and another one, he was bought from mr. Neica Mihai from Bacau.
9.And finally A-mura has a grand father named Cramer de Curtea Veche wich produced half mioritic and half carpatin puppies!
Moreover of that I'll informed all the persons, ACHR, FCI, breeders, owners,etc about this frauds, mistakes, errors,etc but only the members of our club CNCCR are made it the very necessaries corrections
Several conclusions from the facts presented above:
1. You have a false pedigree based on false data
2. You have forbidden consangvinizations in the pedigree
3. You were cheated by the saler persons - owner de Apuseni Kennel because I personally informed him by several times and using different ways about this problems. Mr. Simutiu was even at a contests organized by our club with a very small female of mioritic few years ago !
4. You have to construct your future matting scheme out of all dogs from this pedigree, especially the dogs with huge problems as A-Nuc!

As I informed you before we are working at a datbase with more than eight thousands roumanian dogs mioritic and carpatin as a measure to help you and other like you to find correct data and information, to avoid the falses ,frauds,etc. And all of that only because we respect and love this wonderful breeds!

Please accept my apologizes for this bad news situation presented to you but due to ministry of agriculture order I have the right and obligation to do that
clubulnationaldecainiciobanestir ... _documents
Cezar Osiceanu
President of CNCCR
0040744319130
www.facebook.com/groups/3328949860540551/
www.mioriticul.ro/forum/viewtopic.php?f=19&t=846
Raportează

ClubulNationalDeCainiCiobanestiRomanesti 12 februarie 2013
Good evening mrs Monika Hindsches
I hope to be well understood in my information letter sent to you.
You have to understand that breeder de Apuseni was cheated you saling that dog with that genealogy,
His scope was to take the money not to protect the breed. Your dog can be a very good one for you but it is like an atomic bomb armed for the breed in case you will not taking into account my information which I already sent to you.
As a fist measure as I told you before you have to chose a male for matting outside of this lines and after the first litter you can see the results,We can help you with our data base and information for free because with really love and respect the breed.
For all what I informing you know,and many others, my dogs were killed, my house was burned by unkown persons,etc even they made a site against me antiosiceanuforumhit.ro
So if you need help you have to contact first the breeder de Apuseni and to ask from him some answers at this questions:
- why he choose to do the dogs with such a genealogy with so many consangvinizations
- why did not informed you before about this in order to chose you by knowing the realities if you buying the puppy or not
- why he choose to make those consangvinizations by some many times repetead after A-Nuc a mixture between mioritic and carpatin.
- why he cheated you ?
We intend to declare in public and in mass media all this cases even in Austria, in order to protect the people with good sense against the posibilities of fraude, mistakes,etc in the pedigrees eliberated even in Austria.
I hope you will joined us in this fight for the mioritic breed benefit.
Cezar Osiceanu
Raportează